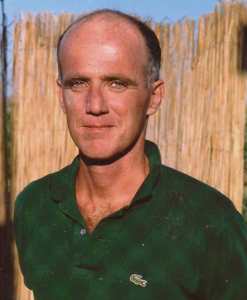 Alessandro Marziale was born in Rome 2 September 1954. His mother Giselle Pons was half Georgian and half French, while his father, Fausto Marziale was Roman. Marziale attended the French Lycée Chateaubriand in Rome and received his scientific high school diploma from the Liceo Scientifico Ottorino Respighi in Rome. From earliest childhood, Alessandro showed vivid interest in all forms of art, from painting to music, thanks also to the influence of his maternal grandmother, the famous New York costumer and designer Helene Pons (link www.helene.pons.com), but perhaps it was his encounter with French doctor-sculptor Yves Grange that induced him to enroll in Pericle Fazzini’s course of sculpture at the Rome Academy of Fine Arts. After one year, he transferred to the Urbino Academy of Fine Arts where he received his degree in sculpture and engraving. During this period he exhibited his work in Urbino, Venice and Ivrea.

In 1977 after his degree, he traveled to Egypt and India with his first wife, Susanna Bassi and their one-year-old child Blu Abraxas. In India Marziale created a series of ink drawings and water colors on the theme of the Indian Ocean. When he returned to Rome he began a period of intense creativity : from engraving to sculptures in wrought iron and lodging forms made of tender stone pine within enameled steel plates which were exhibited in 1980 at the Galleria Provieri in Piazza del Popolo, Rome.

IN 1981 he began investigating various painting techniques while working in the theatre as a ‘participating’ scenic designer, taking part in a Cosimo CInieri’s production entitled Cherchez la famm…, where he drew and painted on stage, as he explained:

Marziale then went on a research trip to Mexico, where he continued painting and sculpting.

There was always a sense of urgency in everything he ever did, as if in some way he had foreseen his early demise. He had a fascinating, magnetic personality, especially for women, but he was also extremely close to his sons and deeply attached to his family. There is a delightful painting he had created together with his second son Lupo when he was only four years old. He was by nature a nomad, even though family commitments and the need to earn in order to support them forced him to lead a more regular life during the last years of his life.

He was only 37 when he died in a road accident 1 February 1990. He leaves two sons, Blu and Lupo Marziale.

This website uses cookies to improve your experience while you navigate through the website. Out of these, the cookies that are categorized as necessary are stored on your browser as they are essential for the working of basic functionalities of the website. We also use third-party cookies that help us analyze and understand how you use this website. These cookies will be stored in your browser only with your consent. You also have the option to opt-out of these cookies. But opting out of some of these cookies may affect your browsing experience.
Necessary Always Enabled

Any cookies that may not be particularly necessary for the website to function and is used specifically to collect user personal data via analytics, ads, other embedded contents are termed as non-necessary cookies. It is mandatory to procure user consent prior to running these cookies on your website.